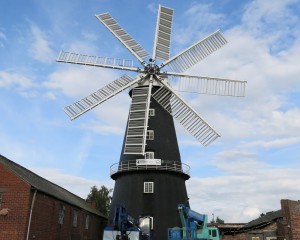 Heckington is believed to be the only location in the UK (and probably the world!) where there have been windmills with 4, 5, 6, and 8 sails.
Our own Pocklington’s mill was built with 5 sails and changed to 8 in 1892.

Mowbray’s (or Mowberry’s) Mill on Sleaford Road, Heckington had both 4 and 6 sails in its past. Today all that remains is the derelict tower.

The mill was originally built in 1830 by Edward Ingledew of Gainsborough for Michael Hare as a five-sailed mill.  Following a severe thunderstorm which blew off the cap and sails, it was repaired in 1892. The repairs were carried out by John Pocklington using a cap and eight sails from a windmill in Boston.  The bricks from the Boston mill were recycled and used to build the mill house that stands at the front of the site.

Heckington mill ceased work in 1946 and deteriorated until it was purchased by Kesteven County Council in 1953 and made safe. The mill underwent restoration in 1986 and further major repairs were carried out in 2004 and is now in full working order.

The mill is now owned by Lincolnshire County Council, but is operated and run on a voluntary basis by Heckington Windmill Trust

15 minuets drive from the stable cottage is the BBMF a unique partnership between the Royal Air Force and Lincolnshire County Council. 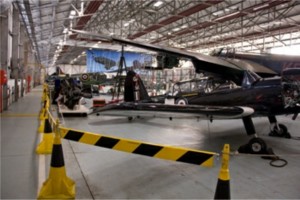 Since opening its doors in 1986, the BBMF Visitor Centre has welcomed over 300,000 people, offering them the opportunity to see the Flight’s historic aircraft at close quarters and to observe the BBMF technicians working to maintain them in airworthy condition.

The RAF BBMF hangar is located within the boundaries of RAF Coningsby and viewing the Flight’s historic aircraft at close quarters is available only by guided tour. You will be shown around the hangar by volunteer guides, many of whom have firsthand experience of the aircraft.Whilst in the hangar you will be able to observe the RAF BBMF technicians maintaining these iconic aircraft to airworthy condition.

Tours of the hangar last approximately one to one and half hours. Tickets are available through the visitor Centre upon your arrival. (Hangar tours are available from 10.30am and run throughout the day. The last tour is at 3.30pm March – October (3.00pm November – February). Admission Charges apply.

The National Centre for Craft & Design

The National Centre for Craft & Design started life at The Pearoom in Heckington. The Pearoom was built in 1870 by the Great Northern

Railway Company and shortly afterwards was leased
to the internationally renowned seed firm of Charles Sharpe of Sleaford. Sharpe used it as a pea-sorting warehouse right up until 1961. Locally grown peas were brought to the Pearoom by horse and cart with peas from further afield being delivered by rail for sorting and then exporting.

In the 1970s, with the help of Government grants; fundraising activities; hard work by many volunteers; and leadership by the Heckington Village Trust, the Pearoom was converted into a heritage, craft and tourism centre for the village. It was operated by the Village Trust and a team of dedicated volunteers until a licence was granted by the trust for North Kesteven District Council.

The Pearoom established itself as a contemporary craft centre, displaying a range of exhibitions through two gallery spaces and delivering a short course programme and unique shop. Artist workshops and a café also attracted some 30,000 visitors each year. This has now been transferred to The National Centre for Craft and Design situated at The Hub in Sleaford

Belton House is a Grade I listed country house in Belton near Grantham, Lincolnshire, England. The mansion is surrounded by formal

gardens and a series of avenues leading to follies within a larger wooded park. Belton has been described as a compilation of all that is finest of Carolean architecture, the only truly vernacular style of architecture that England had produced since the Tudor period. The house has also been described as the most complete example of a typical English country house;[2] the claim has even been made that Belton’s principal facade was the inspiration for the modern British motorway signs which give directions to stately homes. Only Brympton d’Evercy has been similarly lauded as the perfect English country house